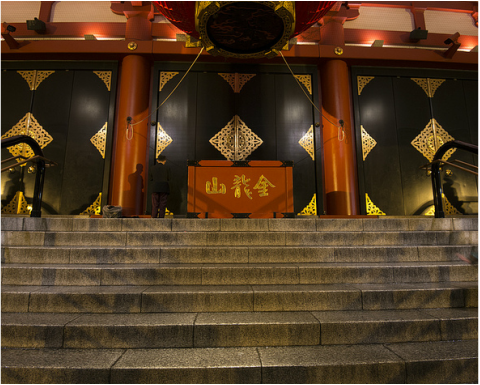 Sweeping
Gold dawn disk edges purple cliffs.
Old woman bends to sweep temple steps
She bathes ea﻿ch stone with loving care.
How many worshipers think of her work?
I went down to a magnificent temple. Its architecture was such a supreme expression of the human spirit that it was a treasure. Generations of worshipers had left offerings at the shrines, hundreds of monks had reached their enlightenment on the consecrated grounds, and thousands had been blessed in life and in death in the ve﻿nerable halls.

Yet my most moving observation was an old woman silently sweeping the steps.  Her concentration was perfect. Her devotion was palpable. Her thoroughness was complete. Her uncelebrated act showed a true holy spirit.

Later in the day, wealthy people came to worship. Children with brightly colored toys ran over the gray stones. The abbot walked to his ceremonies. Monks passed in silent prayer. Of all who passed, how many were aware of the saintly service that had made their own devotion possible?

When way is all we have to walk, those who prepare the way should be honored.